The Less Romantic Side of Geo-Arbitrage

Or how working in paradise can really suck. 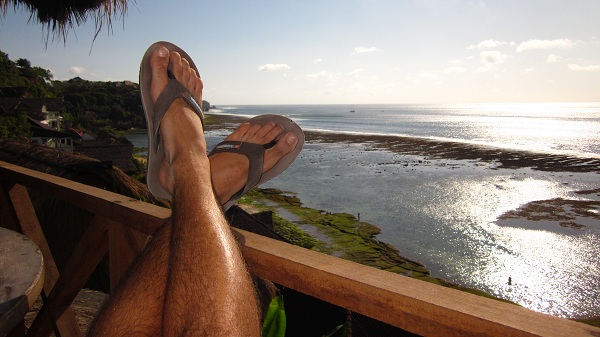 [The porch out front in Bingin, Bali. As if I’m actually going to get any work done here…]

I was in the deepest of sleeps. My dream put me somewhere in the mountains, walking down into a beautiful valley with the wind lightly rustling my hair. The rustling got a little stronger until–wait a minute…

I opened my eyes in time to see a giant rat sprint to the edge of the bed and then leap off into space like a possessed flying squirrel.

Everyone within 50km must have heard as I bolted out of bed and ran around the compound screaming bloody murder. When my roommate figured out what happened he nearly choked to death from his own laughter.

This is about when the glamour of my lifestyle really started to fade.

I went to Bali to work, surf, and chill out

Inspired by the likes of the Tropical MBA, the desire to surf perfect waves, and the intent to survive on a budget of less than $20 per day, I figured Bali would be it.

Well, I had the right idea anyway.

By the time my little furry friend was scampered over my head I already had a handful of coral reef-inflicted wounds that wouldn’t heal, a chronic feeling of general malaise brought on by who-knows-what, and some relatively shattered nerves from facing Indonesian traffic on an under-powered Honda motorbike.

Other than that, life was great.

But I was deeply internalizing how geo-arbitrage isn’t necessarily all that it’s cracked up to be.

Wait, what the hell is geo-arbitrage? Basically, what we’re talking about here is leveraging a first-world salary (or part of one) in a third-world country. Or just living in a place where your home currency can go a long way.

The beauty of this concept is that while making $1,000 a month in the US is only viable if you live in a van down by the river, the same amount in Indonesia will get you 3 squares, beach-front accommodation, and a x2 boat out to the surf break ever day.

The only problem is, living in developing countries can be really, really difficult. Especially if you’re really cheap. [Cough]

Don’t get me wrong: I’m all for the concept of extending your cash runway as long as possible while you figure out how to escape the real world. And places like Bali are fantastic for base-lining, or breaking even by going to a place where you can survive on whatever amount of cash income you actually have, e.g. less than $1,000 / month in Bali or $500 / month in Chang Mai, Thailand.

That’s really what I was trying to test out here: can I finally break even despite pulling in a pretty meager income from a host of different online shenanigans? And if so, do I actually want to live here?

While I broke-even in Bali for the first time on my trip, I also re-learned that traveling is much different than living, and if you’re going to stay in a place for more than 2 weeks you better have a damn good reason to be there (a lot more than just the fact that it’s cheap). There is no chance I could have dealt with Bali for more than 15 minutes if I hadn’t also been surfing.

The Catch-22 here is that the only reason I stayed on Bali as long as I did was to have reliable access to fast internet, the albatross of online work. Staying near the internet also meant hanging near some particularly crowded surf breaks instead of finding my own deserted slice of paradise.

While I still caught a lot of waves and got a lot of work done, I wouldn’t necessarily do it again. I’d rather focus on one thing at a time than do two things under marginal conditions.

And lets be honest: working in coffee shops generally sucks.

Not having a dedicated workspace is a real pain, and trying to find a place in Bali that had both good internet and accessible/livable location was difficult.

My spot ended up being a nice little café called Jiwa Juice near Bingin and Uluwatu. It was excellent, but inevitably after 2 weeks of eating the same thing and swatting flies all day I needed a change of scenery. Only problem: there was no where else to go.

I got kicked out of the only other place with internet on day 2. 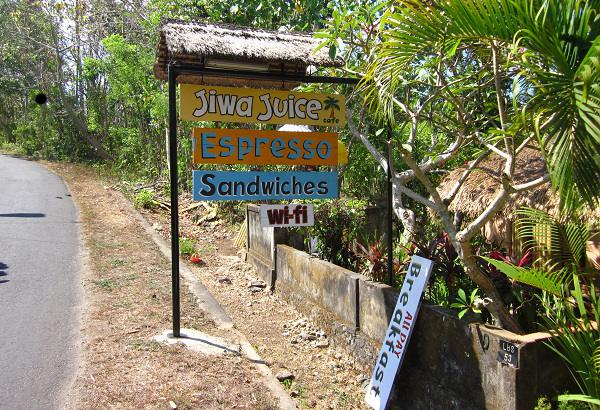 I’ve personally been kicked out of more than a few coffee shops just because I didn’t spend enough (“Sorry sir, but buying a $1.00 coffee does not entitle you to use the internet….”).

But coffee are pretty low on my list of high-productivity locations. If you aren’t getting hassled or interrupted by the staff then the Wifi doesn’t work, or it’s too slow, or the power goes out, or the AC doesn’t work, or whatever, you get the point.

It doesn’t matter who you are (and I claim to have unimaginable powers of concentration), there is no way you can get as much done working on a laptop in a crowded room as you could on a dedicated work-station with dual monitors, a real mouse, and broadband internet.

Which brings me to my next point:

The real answer may be (surprise) to stay at home.

It may make a lot more sense, at least in my case, to keep working on the road at a minimum, and return home more often.

The general concept of geo-arbitrage sort of blacklists the US as a place to live and work. But it’s actually cheaper for me to live in the US than it is in Bali (this blew me away when I first figured it out).

At home I don’t pay for lodging (I have a network of great people who lend couches and I live on the West Coast where I can camp out on the beach if necessary), I don’t eat out but cook all my meals (so food is relatively cheap), and I have almost no added expenses (except temp health and car insurance, and fuel). The internet is also generally fast as hell (or at least reliable) and I know where I can get a good cup of coffee and not get hassled for a few hours.

It’s also easier to create consistency and drop the psychological burden of never quite knowing what I’m going to get in any given situation. Just eating in Indonesia was an adventure: probably 1/3 of my meals we’re grab bags–not what I ordered–unless I asked for a slight variation to a menu item–then it was 100%. It was almost useless to order anything besides nasi champur (‘whatever you got in the case over there…’).

Do anything long enough and you’re going to hate it.

Better to focus on one thing (work) and then do something completely different (surf in Indonesia and forget the internet). 1-3 months of work followed by 1-3 months of something else. I used to try to do everything all the time, but not anymore.

I’ve actually been spouting off this thesis for a long time: the reason ‘real life’ sucks is that the cyclical nature of things you used to have in school (a few months on, a few months off) is replaced by a never-ending and ultimately soul-crushing grind.

I’m actually just rehashing the Tim Ferrisian concept of the mini-retirement as articulated in the 4-Hour Work Week, and that’s because it finally sank in: I get it, cycling works. Things are really only interesting in relation to the last thing you were doing, and there is nothing I want to do for more than 3 months at a time–not work, not travel, not even surf. 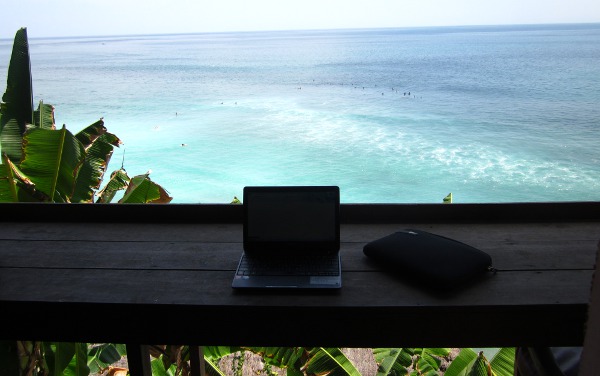 [Awesome, right? Just get rid of the damn laptop!]

Without digressing too far from the point (‘he has a point?’), the whole concept of periodically changing things up dovetails perfectly with research discussed in The Paradox of Choice (which I recently finished reading). Basically, we normalize to just about any situation, so as cool as your beach-side office is at first it’s not going to seem that great after a few months of swatting flies, squinting at the screen, and sweating all day.

That’s why you’ve got to keep it fresh.

Home is where the heart (or hot shower) is.

Living in a foreign country is rewarding but takes a lot out of you. Even if you don’t have a pet rat in your room you may still have to deal with non-functional showers, bad customer service, and generally not ever getting anything you want when you want it. While I’d like to think that ‘I can live on board nails’ I’ve realized that about 6 months at a time is all I want to take.

Of course, this was just my experience in Indonesia, and every place is different. I’m also doing this low-budget style. You can definitely buy a little more comfort with more cash, but I don’t think you’re gaining as much as you think.

The next time I live in a foreign country I’m going to spend my time focusing on living there, which means I’d better get my work done before leaving.

7 Key Lessons From Business Building in 2015

The 6 Phases of Lifestyle Design